Last Sunday my husband Michael and I drove six or so hours up to Whistler, Canada for a ski trip.  Forgoing our three year tradition of going to Aspen, we decided to venture to Whistler instead.  Both locations have positives and negatives, but one of the positives of Whistler, is that we took our own skis with us.  It’s kind of like sleeping in your own bed, your own skis are almost always much better than rented ones.

We were lucky enough to stay at the Fairmont, at the base of Blackcomb mountain.  It’s a ski in / ski out resort with a ski valet and believe me, if you are there to ski, that’s what you want.  There is nothing better than going down stairs to the ski valet area and having them pull out your boots and skis, while putting your shoes in their place.  Out the door, over to the lift and off you go.  Come back after a day of skiing and simply trade your ski boots and skis for your comfy shoes and up to your room for a hot shower.  It couldn’t be easier.

Skiing in Whistler was new to me this year.  We had been about 5 years ago, but I was just learning then and I only took a short lesson and snowshoed the other day we were there.  So this time, with a few years under my belt and three ski clinics in Aspen, I was ready to actually ski.

I’d say our second day was my best day.  Michael and I skied hard from morning to lunch and then he met up with a friend and conquered his first double black diamond bowl, while I opted for a hot bath.  Since discovering I have overly cranky hips and knees from years of ballet, my orthopedic swami told me to take it easy on the slopes.  So, no bumps, bowls or blacks for me.  But I do feel I pushed my personal envelop by navigating through some deep powder, taking a few steeper than I’d like runs as well as driving for speed a few times.  So, all in all I was pleased with how I skied.

Our third day of skiing we encountered some thick fog mid mountain.  A friend of ours once said that skiing in thick fog was like skiing in Mordor – and he was right!  It’s no fun at all.  When everything around you is white to begin with, add a thick white mist in front of your face and it’s a whole new ball game.  You seriously can’t see s***.  Add flat light to the mix and you are lucky if you can see the tips of your skis (having black skis really paid off).  I usually request Michael to ski in front of me, so all I do is follow.  When we were skiing in the fog, we were passed by about 15 or so skiers & snowboarders.  I suddenly couldn’t tell which one was Michael.  I frantically looked up and tried to discern his silhouette from all the others.  It was impossible.  Now, I not only couldn’t see where I was going, or what was around me, or the outline of the run, but I seemed to have lost my husband as well.  I just followed everyone and eventually caught up with him.  Phew!

Upon the recommendation of our friend Bob, who frequents Whistler often, we were armed with the names of some great places to eat.  Our first night we had reservations at Il Caminetto di Umberto, located in Whistler Village.  We began with a wonderful starter of Foie Gras on toast with stewed cherries.  While a tad expensive, this was the first time each of us had multiple bites of the generously portioned, amazing smooth and buttery substance.  And the sweetened cherries were to die for.  I could have had them on ice cream and been happy.

Next we each had a salad, I had a beautiful and tasty salad of Buffalo Mozzarella & Roasted Beats.  My entree was Rabbit Stew (a kind of ragu) and Potato Gnocchi.  This was perfect cold weather, fill you up after a hard day skiing kind of dish.  Very hearty, and extremely flavorful.  For dessert we shared a lovely Lemon Tart. 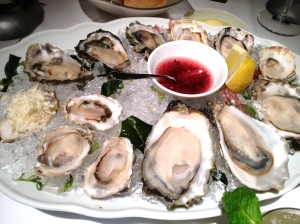 Our second night, we ate at the famed Araxi also located in Whistler Village.  Bob, our friend mentioned above happened to be in town and so he joined us for dinner.  We began with a chef’s choice platter of fresh oysters.  What can one truly say about oysters?  If you like them, sometimes there is nothing better in the whole world than the stunning simply and yet uniquely complex salty brine of a fresh raw oyster.  Served on a bed of crushed ice and with some gourmet condiments, the presentation alone is worth the cost of ordering them.  I, however always like mine naked, nothing to distract, disrupt or otherwise take away from the delicate and distinct flavor.

Araxi also has a wonderful Raw Bar page in it’s menu and I couldn’t help myself, so I ordered a Spicy Albacore Tuna Roll with cucumber, crispy shallots and spicy miso dressing and a Local Octopus “Sunomono” salad with potato noodles, daikon, carrots and shiso.  The Octopus Sunomono was phenomenally good.  I adore this type of salad –  the lemon & vinegar dressing highlight the toothsomeness of the octopus.

The men had duck as their entree while I opted for a small plate of another buffalo mozzarella and beat salad.  We finished with the Valrhona Chocolate Fondant, a warm chocolate cake with milk chocolate earl grey tea ice cream as well as an order of their chocolate and vanilla ice creams – all to share.

Whistler may have just beat out Aspen.  Although the snow in Aspen alone is worth the trip.  As I said, both locations have good and bad points.  Either way, nothing quite screams “I’m alive” like being on the side of a mountain, in the snow and the crisp air with the world outstretched in front of you.