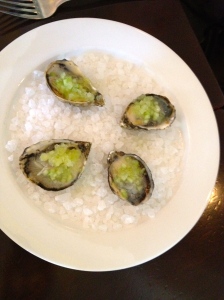 While I was out of town at Culinary Camp in Seattle, my husband was also out of town at a seminar.  Once we were both back home in Olympia, we went out to lunch at a restaurant that shall remain anonymous.

Now, I have just come home from five days of a cooking camp hosted by a James Beard award-winning chef.  Five days of eating (and drinking) amazingly well, with top-notch ingredients, prepared a by team of professionals.  But, I’m not going to hold this nameless restaurant to the same standard as the level of excellence I have been blessed to have just experienced.  But I do hold them to the minor laws of restaurant eating.

We often order raw oysters on the half shell at this establishment, as this is one of their specialties.  In times past, their shuck job has been rather slap-dash.  And our most recent meal was no exception.  The first oyster I ate was darn near un-edible, it was so full of shell.  Now, you’d think if a restaurant has the word oyster in it’s name, then maybe they’d take extra pride in their raw oyster presentation.  I guess not.  However, I remained silent.

On to the entrée of a halibut burger, my go to choice.  I was into the sandwich four or maybe five bites, and I sensed quite a grotesque sensation in my mouth.  I’m positive it registered on my face, as my husband looked at me with concern.  As gracefully as I could, I fished around in my mouth and pull out a medium length light brown hair.  Now, this hair was NOT mine, I have long dark brown hair that is almost always up in a bun.

Strike Two!  Sitting for a minute or two to let my stomach recover from the retch reflex, I finished my food, because I was still hungry (more or less).  When our server came over, I politely showed him the hair and he said he’d take it to the manager.  In a few minutes our server returned to tell me my meal had been taken off the bill.  In all honesty I expected that, at the very least.  What I didn’t expect was our server doing the apologizing without a personal visit from the manager.  I realize, these things happen (I guess) and sometimes a mistake is made.  We are all human.

The difference between a mediocre restaurant and a great one, is . . .  well, a great deal.  Service for starters.  The manager at The Shell & Hair House is only working his or her job, nothing more.   The manager at Lola, Dahlia Lounge, or Serious Pie is part of something greater.  They are part of a team, a vision, and it’s more than a job.  It’s something they take pride in and ownership of.  I’ll take the person who loves what they do over an employee any day.

Note: the photo of the oysters, was not taken from the nameless restaurant in Olympia.  It was taken from The Coterie Room in Seattle.