Posted by labuznik on November 13, 2017 in Experience 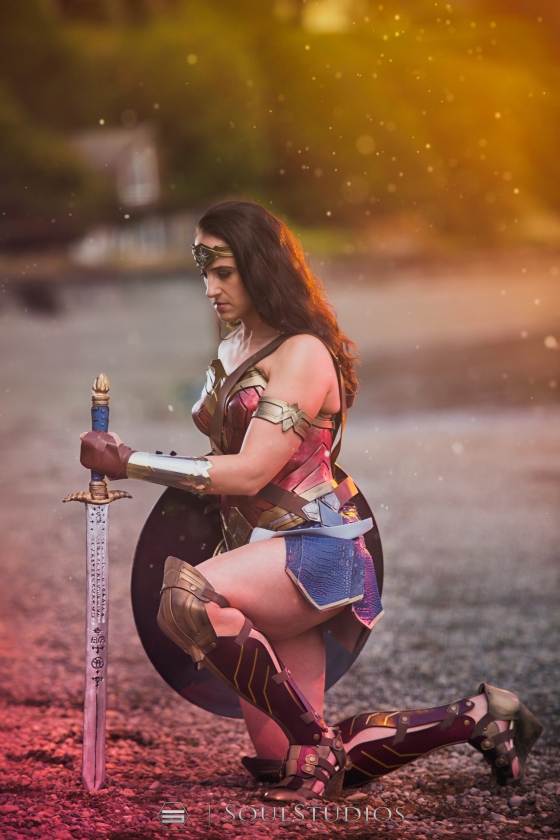 After attending last years Emerald City Comicon in Seattle, for the first time in costume (as Wonder Woman), it occurred to me that I should reach out to Seattle Children’s Hospital and see if I could set up a time to visit.

It took several back and forth emails, but a date and time were set and my visit was scheduled. As the date grew closer, I became nervous. I had never done something like this before and I was a bit apprehensive about how the whole event would go. I had no idea what to expect. It didn’t help that my wing-man (my husband) was planning on being with me and had to bow out due to an unforeseen work thing. But I certainly could handle it. As long as I could “borrow” a female hospital staff member to help lace me into the corset-style back of the bodice, all would be well.

I received a PDF file as well as a lengthy email about the details surrounding my visit. Details included where to park, getting security clearance, everything I was bringing in had to be clean, no photographs of the children, they need to approach me, they can touch me but not vice versa, bring about 100 of whatever I’m bringing (WW stickers, my trading card, WW coloring sheet), keep everything positive, lots of smiles, be upbeat, etc.

Due to security reasons, I would be unable to arrive in costume. Which was both a blessing and a curse. Driving or even riding in a car in costume is not comfortable. However, “suiting up” takes some doing, as well as time and assistance, so it’s most convenient to get dressed in a comfortable and familiar environment (preferably with a full-length mirror). After emailing my contact that I’d need a female staff member for 5 minutes to lace me into the bodice, I was confident I could handle this journey solo.

Day Of
With my make-up and hair ready, sword & shield in the back seat, and multiple elements to the costume in a suitcase in my trunk, I headed out. The staff was so welcoming and kind. I was shown to the playroom and introduced to the two ladies that would be my handlers and escorting me around – Toni and Kathy. I was given a private office to change into. Toni helped lace me into the bodice, and she also put my sword in the scabbard on my back. I grabbed my shield and I was ready. In walked a little gal with her mother. Her eyes were big with amazement, but she was pretty shy. She was clearly interested and wanted to see what I was about. I knelt down on one knee and handed her a trading card and a WW sticker. This was Oma. A beautiful Hispanic girl with a bandaged up right arm. She didn’t say much but it warmed my heart when she leaned in close to me during our photo together (I was still on one knee). Toni would take a Polaroid photo of myself and the patient, then give it to the child or parent to keep. The only photos I could take (with my phone) were with staff, with their permission and an overturned ID badge. 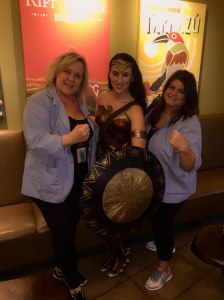 The original plan was to stay in the playroom and let the kids come to me, but Kathy and Toni had other plans. Kathy grabbed my folder of goodies for the kids, Toni grabbed the camera and film packets, and we headed out. I said good-bye to Oma.

I learned that when most of the cool visitors come (Russel Wilson, Chris Evens, and such) they mainly see the cancer patients in the two cancer units (one for children and one for teens). Seattle Children’s Hospital is a huge facility with many different units, floors, and wards. Many patients don’t get to see any special visitors besides their parents, so Toni and Kathy decided today was their day!

Our routine would go like this: Kathy would walk ahead of Toni and I into the patient’s room and say, “I brought my best friend with me to work today and it’s Wonder Woman, would you like to see her?” All but once, the response was yes! Toni and I would quickly sanitize our hands (via wall mount) and walk into the room. Entering with a full smile, giving eye contact to the child, I’d begin to chat with them. Sometimes there would be a conversation, sometimes there was small talk and sometimes there was no verbal communication from the patient at all. I kept chatting anyway. I would comment on different things of theirs in the room, or what they were wearing, or pictures of theirs on the wall, etc. If I saw they were looking at a particular part of my costume, I’d chat about that. I’d talk about my shield, the sword on my back, my indestructible bracelets, or even the lasso of truth. Once they knew what the lasso did, I often got looks of astonishment. During my chatting, Kathy would hand me my trading card and a sticker for me to give the patient. I also gave them a WW coloring sheet and a small box of crayons (supplied by the hospital). We’d pose for a photo and often I’d sign it. Then just like that, our time would be up and I’d say good-bye. We’d walk out of the room and sanitize our hands again. 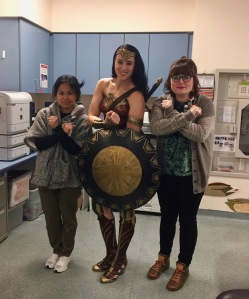 If we were walking in the hall and I was seen, we’d gauge the interest (usually excitement) and walk into the room and repeat the process all over again. I got pretty good at picking out things to chat with the kids about, as many were shy. One little fella, who had just had surgery the day before, didn’t say anything during my visit. I saw Spiderman on his fleece blanket, so I said I knew Spiderman. I said that he and I would often fight the baddies together and then go to Starbucks afterward. It didn’t matter that Spiderman is Marvel and WW is DC Comics. I said I quite enjoyed fighting crime with Spiderman cause he’s so cool, acrobatic and flies around with his webbing. Of course, I can fly too, but that’s why we make such a good team! I enjoyed improvising stories about WW’s adventures.

In the hallways, we’d pass administrative staff, clergy, nurses, doctors, catering staff, and cleaning staff. The response from everyone was so positive. A few staff wanted photos, which was so awesome! Mostly, the doctors were a little “too cool for school” but I caught them giving me the side-eye as we passed. One nurse showed me a WW pin on her ID badge as we were posing for a photo together. I told her she is a Wonder Woman!

We went from unit to unit, floor to floor. Toni had the great idea to enter the dialysis ward with the WW movie theme playing. I cued the music up on my phone and handed it to Toni. We got the ok from Kathy to enter the room, Toni pressed play and in I walked. Oh, you should have seen the look on their faces! Gal Gadot herself couldn’t have done it better. It was such a special moment to see the pure joy and excitement coming from the kids. One overjoyed little gal eagerly pulled out a small Wonder Woman figure to show me. A true fan. A fellow Amazon. This little warrior princess was amazing, they all were! Strong, fearless, and insanely brave. All the kids were just phenomenal and so inspiring to me. 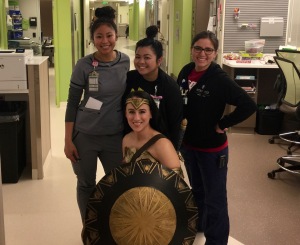 We were making our rounds in the rehab unit and a little gal heard I was coming and darn near ran out of her room. She had blonde hair and a sparkly pink top on. I knelt down for a photo and it was clear she wanted to hug me. I looked to my handlers for the ok and they nodded. We hugged. Then mom wanted to get a photo of the hug so we needed to hug again. This time she didn’t let go. My heart just melted!

Two hours doesn’t seem like a long time, but after seeing over 40 children, I was both sad my time was ending and partly relieved because I was exhausted. We headed back to the playroom. I went back to the office to change back into a mortal. I seriously can’t tell you how tired I was. After getting back to our condo in downtown Seattle I had the good sense to spend 20 or so minutes in the hot tub. Later that evening, Michael and I went to one of our favorite restaurants (Palace Kitchen) for our very favorite burger and a much-deserved cocktail. I ate the whole burger, with lots of fries, and half a piece of White Chocolate Coconut cream pie – and after all that I was not stuffed, but simply satisfied and perfectly content. I was in bed by 8:30 pm. 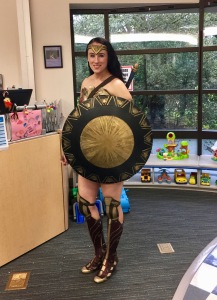 One comment on “Wonder Woman at Seattle Children’s Hospital”