Posted by labuznik on December 21, 2015 in Experience, Opinion, Performance Art 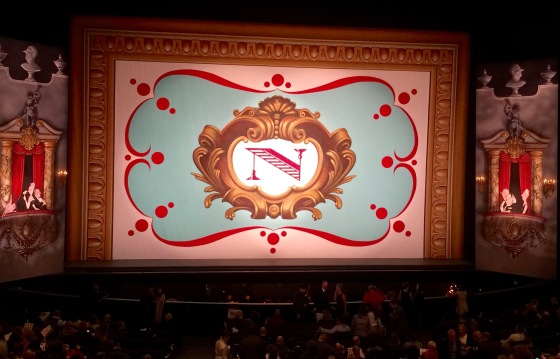 Kicking off my weekend was a blissfully sublime facial by Brigitte at Spa Nordstrom in Seattle. The following day, in lieu of some plans being canceled, my husband and I had a wonderful lunch at the Dahlia Lounge. We then strolled the city separately, looking for stocking gifts for each other. Saturday evening we had tickets to Pacific Northwest Ballet’s new Balanchine Nutcracker with scenic and costume design by Ian Falconer (of children’s book Olivia fame).

We left with ample time to get to McCall Hall but quickly realized that we were not the only ones on our way to the Seattle Center that evening. Traffic was insane. Through some savvy maneuvering, we finally found our way to the Seattle Center parking garage on Mercer (where we normally park for the ballet). The attendant was happy to take our $20 to park, however after driving the lot at a snails pace along with several other drivers, we realized there was nowhere to park. And yet they were still letting cars flood into the garage. The clock ticked by and the 7:30 pm curtain time was inching closer and closer. My dearest husband was at full boiling point and ready to smash someones head into a brick wall. Doing my best to remain calm, I encouraged him to park with a few cars ahead of us on a parking ramp full of Do Not Park signs. Other cars quickly followed suit. It remains a mystery as to why this entire parking ramp was off limits – and yet the rest of the entire garage was full. Happy we weren’t going to be late, I quickly tried to forget the whole incident. Michael on the other hand was having trouble letting it go.

Being an avid fan of PNB’s previous Stowell/Sendak Nutcracker, I was heartbroken to see the production retired last year. It was truly a one-of-a-kind staging. A show that put PNB and Seattle on the Nutcracker map and defined the remarkable Northwest show as a must-see Holiday tradition. In short – there was nothing else like it in the ballet world of Nutcracker’s. It had been a completely unique and distinct show since 1983 (running for 31 years).

I tried to keep an open (unbiased) mind as I sat in the theatre. Having not only performed in my fair share of Nutcrackers, I have also directed and choreographed many a Nutcracker. Once that music starts, a smile creeps across my face and a flood of memories fill my brain and often muscles. I know that music, like most ballet dancers, like the back of my hand. And while you can’t walk into a department store nor board an elevator without hearing the “Nutcracker March” or the “Dance of the Sugar Plum Fairy”, the “Snow Scene” music is one of my all-time favorite pieces of Tchaikovsky.

The production started with a lovely animated video. As snow fell, one flew over a beautiful moonlit snow-covered landscape, through a dense forest and into a remote European village. Finally, we came upon a beautiful grand home and the front door opens, as if inviting us in for a magical and mischievous, yet familiar adventure.

The opening party scene, was fairly typical and traditional. This has always been my least favorite scene and in my (dancer) opinion, Nutcracker doesn’t really start until the snow scene. One thing I noticed and didn’t particularly fancy was the 5-6 minute buffer scene between the party scene and the fight scene. This was completely unnecessary and seemed to serve little purpose other than to provide time for Clara to change her costume. The music played was not part of the Nutcracker score.

The Balanchine fight scene has NOTHING on the Stowell/Sendak version and was in my opinion week and rather lame. The Stowell/Sendak fight scene had impressive moving, larger-than-life sets, a live cannon, and adults (or accomplished dancers) doing much of the mouse and toy solder “fighting” – therefore the choreography was far more impressive. The Balanchine version used children and the choreography was far less skilled.

After the fight scene, in the Balanchine version Clara remains a child versus growing up to an adult in the Stowell/Sendak version. Gone is the lovely pas de deux between adult Clara and her Nutcracker prince just before the snow scene. And instead, child Clara is on a remote-controlled bed moving about the stage.

Ah, the snow scene, here we go! Wait, What!?! Why are they flying in additional legs on both sides of the stage? (Legs are like wings outlining the sides of the stage but hard and not made of fabric) Why on earth are they cutting the size of this beautifully grand stage in half?!? Now the snow scene dancers have this puny bit of space to dance about to this amazingly grandiose and fast-paced music. And now they have snow balls on wires in their hands?!? Um, no . . . no thank you.

During the intermission I encouraged Michael to go and check on the car. He was still fuming and was sure the car would be towed because we parked where there were no parking signs up. Upon his return he reported the entire row that said no parking was full of cars. I noticed his spirit seemed to have lifted slightly and we were able to laugh about a rather stinky aroma (produced by someone other than us) that wafted our way (and lingered) during the snow scene.

Peter Boal, PNB’s Artistic Director hailed from New York City Ballet, where Balanchine’s Nutcracker was born – so it’s fairly honest to say that he is biased, as that’s the Nutcracker he grew up with (and danced in since he was a boy). He has said in several interviews that the Balanchine choreography is better and highlights the dancers more. Well, it is certainly older. Balanchine had himself danced the original choreography while a young man in Imperial Russia, and drew on that experience when he created his own version in 1954. Balanchine’s choreography for Nutcracker is laced with references to the 1892 original by Lev Ivanov.* I however disagree with him on the choreography. Where accomplished dancers took many of the second act variations in the Stowell/Sendak version, children are now dancing those roles in the Balanchine version. Since it is less experienced dancers performing those parts, how can that highlight the dancers more?

Moving on to the second act. I adored the magical, mysterious and whimsical second act world Sendak created for us. As the curtain rose, it was a little too lacy, way too pastel, and far too candy land for me.

Finally, when you do get to the company dancers dancing the grand pas de deux between the Sugar Plum Fairy and her Prince, the solo variations are cut out. WHAT?!? In a traditional pas de deux (dance for two) it begins with a entree, then adagio, then the variations or solos, and then a coda. We saw only the adagio and the coda. No female & male lead variations. So again, this highlights the dancers how?

All in all, this new version of The Nutcracker for PNB is all shiny and fresh. The costumes were amazing, the scenery and sets are also impressive as well as the Chihuly chandler in the snow scene is particularly special. However, my beloved Stowell/Sendak Nutcracker is gone. I shall probably not be returning to PNB’s Balanchine version any time soon. But hey, it’s Nutcracker and any good balletomane knows you don’t go to the Nutcracker for the dancing. You go because it’s festive, it’s a tradition, it’s the Holidays, or you know someone who is in it. Fear not, I always have my dearest Nutcracker on DVD. No it’s not the same, but it will have to do.

Amazon link for a DVD of PNB’s Stowell/Sendak Nutcracker
http://www.amazon.com/Nutcracker-Motion-Picture-Hugh-Bigney/dp/B006A8XFM6/ref=sr_1_1?s=movies-tv&ie=UTF8&qid=1450650511&sr=1-1&keywords=PNB+nutcracker