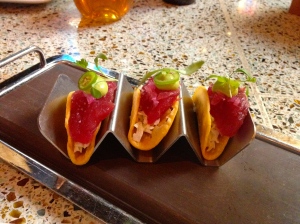 This is a continuum to the last post, titled Las Vegas Food Tour – Otto.  Celebrating our one-year anniversary, my husband and I recently went to Las Vegas.  We ate at several amazing restaurants.  The last post I highlighted our first experience at Mario Batali’s Otto in the Venetian.  This post, I’m going to focus on our first trip to Hubert Keller’s Fleur in Mandalay Bay.

When I found out his restaurant Fleur (an off shoot of Fleur de Lys) was in Mandalay Bay and serves lunch, I booked us a reservation.  I have found that if a gourmet restaurant serves lunch, it’s a great way to experience the food without breaking the bank.

I watched several episodes of Top Chef Masters from 2009 when he was a contestant.  Mr. Keller won several challenges and seemed like a really cool guy, and he was certainly well liked among his peers.  I was excited to experience his restaurant as well as to add his cuisine to my culinary dossier.

We started with the Tuna Taco with Serrano Peppers, Cilantro and Avocado Cream.  Three extremely petit tacos arrived, about a bite each, but boy were they good!  The tuna is flown in everyday, to ensure freshness.  Served raw, the tuna melted in our mouths and we were left with the crunch of the pepper and creaminess of the avocado.  This was a perfect amuse-bouche. 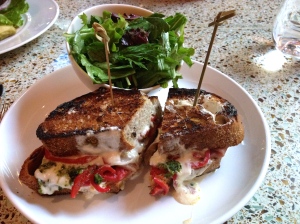 For my lunch entrée, I had the Mediterranean Sandwich with Prosciutto, Piquillo Peppers, Burrata (cheese), and Pesto, on Country Olive Bread.  A small salad of lightly dressed greens was on the side.  This sandwich was amazing.  I started out with my hands, but the bread didn’t hold up well under the gooey cheese or slippery peppers, so I went at it with a knife and fork.  I was surprised that the Prosciutto was not as salty as I normally find it.  I’m sure his ingredients are far superior to what the rest of us find at the grocer.

Adding roasted red peppers to anything pretty much makes it better.  They create a complex flavor profile and have a lot going on all at once: smoke and depth of flavor from roasting, sweetness, a slight tang, and a toothsome texture.

I’m all for checking out the dessert menu, but nothing really blew our skirts up.  So we got the check.  Don’t let this small hitch stop you from coming here!  Perhaps you’ll find something sweet to your liking.

We both enjoyed our trip immensely and have gone one loop larger in our belts to prove it.  I already have my sights set on a restaurant to visit for our next journey to Vegas – L’atelier De Joel Robuchon – by “Chef of the Century” Joel Robuchon.

Until next time – Bon Appétit!