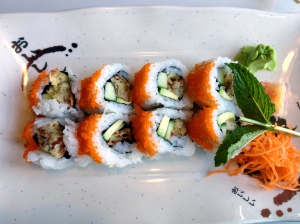 I adore sushi!  I have found there are two kinds of people in this world, those who play for team sushi and those who don’t.  For me there is no question, I love good sushi.  I’ll even tolerate mediocre sushi, however there is no place for bad sushi (mainly because you can and likely will get sick from bad fish).

If you don’t care for sushi, and have actually eaten it, that’s one thing.  If you don’t care for sushi because “raw fish” sounds gross and you have never in fact eaten it, then I take issue.  High quality sushi / sashimi grade fish is amazing.  In the US, due to the FDA’s “parasite destruction guarantee” all sushi grade fish is frozen by law to kill any bacteria.  It must be handled and stored properly and served within a certain time window from being thawed, or it will go bad (something all reputable sushi places know).  Fresh fish should smell fresh and of the sea or not smell at all.  If it smells foul in any way, don’t eat it!  As far as being grossed out by raw fish, I can’t help you.  My only suggestion is to have an open mind, go with a sushi-loving friend and have them gently introduce you to one of the best things ever.  That’s how I started, and I have never looked back.

My number one favorite place is Koiso Sushi Bar in Maui, Hawaii.  But that’s a five-hour flight away.  My second favorite place is Fujiya Japanese Restaurant in Tacoma, WA and it’s a little closer to home.  Koiso offers only a small U shaped sushi bar, but serves some of the most amazingly fresh sushi I have ever had.  Fujiya has a lovely and inviting atmosphere, friendly staff and presents a diverse menu with pretty amazing sushi. 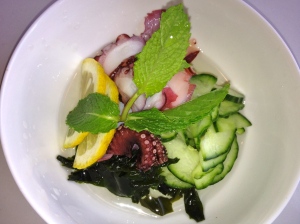 What I appreciate the most about eating sushi is the way my mind and body feels after.  The fresh and simple ingredients make me feel like I’m doing something good for myself.  Fish is an excellent source of omega-3 fatty acids, and I simply feel better knowing what I’m eating is very good for me.

In my opinion, a California roll (cucumber, avocado, crab meat) is not sushi.  It’s the dumbed-down Americanized version of sushi. I don’t prefer anything imitation, crabmeat or otherwise.  However, sushi mainly consists of the many different kinds of rolls, as well as hand rolls (cone shaped and wrapped in dried seaweed) and nigiri (a clump of rice with a piece of fish on top).

I sheepishly admit that I’m not as well versed with the over fished list as I should be.  In fact, I regret to say that one of my favorite all time fishes, is believed to be on the list.  Unagi, or freshwater eel, is typically cooked with a drizzle of BBQ sauce over it.  So every time I’m at a sushi restaurant, I battle with the conundrum to order it (the fish is already at the restaurant) or NOT order it (which would essentially let it go to waste or someone else would get it instead).  I won’t say which one ends up winning out.

So, if you enjoy amazing tasting stuff that’s amazing for you and have never tried sushi, I highly encourage you to try it.  First, choose a good sushi place, second, leave your grossed-out frame of mind at the door and third, if all else fails ask your server to help you.  I’d love to hear your favorite sushi story or adventure.