Back to the Beginning 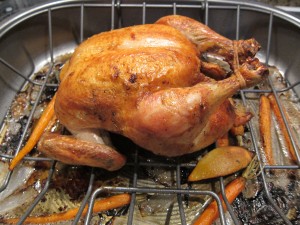 Even though I haven’t been posting that long, tonight I took my love of cooking back to where it started, with a roasted chicken.

Once again, it was my mother’s cooking, her roasted chicken that was one of my favorite dishes from childhood.  In my post college, I’m out on my own and supporting myself years, I’d get a lemon-honey roasted chicken from Top Foods, Stove Top stuffing and jellied cranberries about once every two months.  It was my version, then, of comfort food, since I didn’t really do much cooking for myself nor did I even care to know how to roast a chicken.  I so enjoyed those dinners and considered it a treat and self-love.

A few years ago as my radar began to widen about food and cooking, I took note of several cooking authorities saying how easy and classic a simple roasted chicken was.  Thomas Keller, Ina Garten, Julia Child, Anthony Bourdain – all voices I admired.  After purchasing a standing rotisserie, I decided to attempt my first roasted chicken.  This was a big deal for me, mind you.  I respected the ingredient, the simplicity, and the tradition of this dish too much to care less about screwing it up.  It was also one of the first official meals I cooked for my soon to be husband.

Several years and roasted chickens later, tonight I decided to pan roast the chicken.  Up until now, I had used my reliable Cuisinart vertical rotisserie with great success.  I find it very interesting that roasted chicken started out (as most great dishes do) as peasant food.  And now you pay darn near $30 for it at Bouchon (Thomas Keller) in Las Vegas.

Tonight I added whole baby carrots with a bit of the top greens still on, onions and lemons to the roasting pan.  I really think a room temperature bird is key!  Out of the fridge for at least an hour before in the oven.  To baste or not to baste?  I basted every 20 minutes and the cook time was an hour.  If you like the skin, and I LOVE good crispy golden brown, slightly salted skin, then I think basting is best.  Basting the other things in the pan helps to keep them moist (as in carrots) or crisp skin (as in potatoes).  Basting can also lightly flavor items as well.

Tonight I was also going to try my hand at mashed potatoes and pan gravy, but they didn’t have Yukon Golden potatoes and as a first mashed potato timer, I wanted to get the variety the recipe asked for.  So we had my version of mashed sweet potatoes instead.

So it appears, some of the great things in life to eat started off as “peasant food”.  Funny, didn’t foie gras have a similar start?  I know I know inhumane duck treatment – that’s not my point.  My point is, our tastes change over time, our palate develops and we evolve with the times.  But some things are forever and classic – a black cashmere sweater, a vintage Thunderbird, Paris the city of lights and a simply roasted chicken.